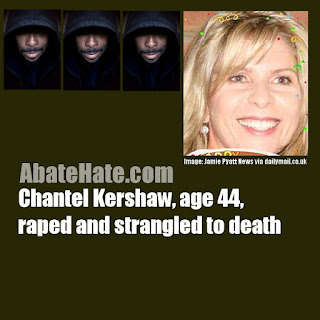 DAILYKENN.com -- Chantel Kershaw, 44, was raped and fatally strangled in South Africa at her South Africa farm after asking for help loading a lawnmower onto a truck.

Kershaw's mother was assaulted with a gun, but survived and contacted a neighborhood watch who contacted police.

Three arrests have been made.

A FEMALE farm manager was sexually assaulted and strangled by two gunmen at her farm in South Africa.
...
Divorcee Chantel Kershaw, 44, was ambushed as she helped load a lawnmower onto a truck by two armed black men.

They then held her down and strangled her in the garage of her farm at Delmas east of Johannesburg and left her lying on the ground before pistol whipping her mother.

Distraught mum Greta Spiers, 65, was restrained as the farm was looted and a maid locked in a bathroom before they fled the scene in the family’s white Chevrolet station wagon.

Local neighbourhood watch farmers forced the stolen vehicle off the road in a high-speed chase after being alerted by the murdered woman’s mum and captured the suspects.

A worker at the farm who was stripped and tied up by the armed raiders was later arrested after the mobile phone numbers of the two arrested men were found in his phone.

The three men appeared before Delmas Magistrates Court charged with armed robbery, theft and murder and were refused bail and have been remanded in custody for trial.

Police spokesman Brigadier Leonard Hiathi said: “Chantel asked an employee to help her load a lawnmower into a truck when she suddenly saw two armed men inside her yard.

“They told the employee to take his clothes off and tied him up and then attacked the woman who was screaming for help and strangled her and then went into the house.

“The victim’s mother was assaulted with a firearm and the house was robbed.

“A high-speed chase ensued between the suspects and the neighbourhood watch group which resulted in the suspects overturning their vehicles and crawling out to escape.

“But they were caught and handed over to the police who opened a case or robbery and murder and a firearm was recovered and ammunition and a bloodstained jacket”.