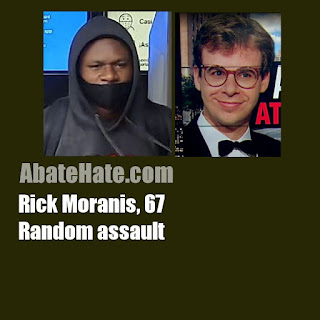 DAILYKENN.com -- Actor Rick Moranis was added to the long list of hate victims when he was randomly assaulted in New York City without provocation.

The assault was captured on video by a surveillance camera.

For generations, blacks have assaulted whites for sport. Such crimes explain why Jim Crow laws existed: To protect white people from black violence and crime.

The hatred of blacks for whites is may be expressions of inferior feelings.

It can be assumed the suspect routinely assaults white people. There are estimated to be countless thousands like him.

The NYPD confirms actor Rick Moranis was randomly attacked by a stranger Thursday on the Upper West Side.

Surveillance cameras captured the attack on the 67-year-old “Honey I Shrunk the Kids” and “Ghostbusters” actor.

Video shows the suspect, ironically wearing an “I Love New York” sweatshirt, walk up and punch Moranis in the head, knocking him to the ground.

Police said Moranis went to the hospital with pain in his head, back and hip. He later walked to the precinct to report the crime.

on October 03, 2020
Email ThisBlogThis!Share to TwitterShare to Facebook
Labels: AbateTheHate