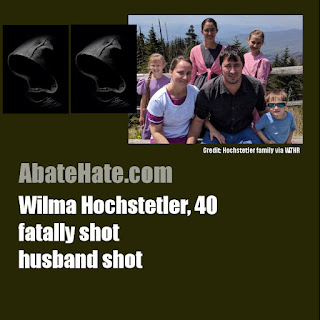 DAILYKENN.com -- Wilma Hochstetler, 40, was fatally shot in Indianapolis. Her husband, Jonathan, was shot in the neck, but survived.

Jonathan's father referred to the suspects as "two Black men."

The couple's six-year-old son witnessed the crimes, reports say.
"I feel no hatred, bitterness, anger, nor revenge towards the two Black men that murdered my daughter-in-law,” Jonathan’s father, Sam Hochstetler, read a letter.
“I extend forgiveness for the two murderers. Revenge only begets more violence. My heart's desire for them is that they would repent, to fall on their faces before the Lord Jesus, and cry out for mercy for their own souls’ sake."
(With due respect to Sam Hochstetler and for his son and daughter-in-law, please note the forgiveness is often overrated. In the absence of genuine contrition and redirection, justice is in order.)
According to wthr.com, Jonathan stopped his truck to repair a lights malfunction on his trailer while in Indianapolis at night when

two men approached, pulled out guns and robbed the couple. They took money and Wilma’s mobile phone, then shot the couple as they left. Wilma died instantly. Jonathan took a bullet through his neck but remained conscious. He went to the truck to retrieve his phone and called 911. The couple’s six-year-old son was sitting in the truck during the incident. Indianapolis Metropolitan Police responded around 1:30 a.m. to the 3000 block of High School Road.