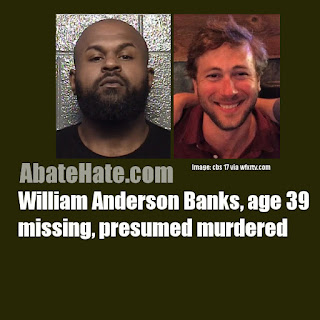 Banks advertised his Range Rover Sport on Craig's List, then went to meet a potential buyer. He hasn't been heard from since.

His vehicle, however, has been found.

Justin Fernando Merritt, 34, has been charged with robbery, larceny of motor vehicle, and possession of a firearm by a convicted felon in connection with the stolen vehicle, Raleigh police said in a release.

Banks lives in Raleigh, North Carolina. His vehicle was found in Danville, Virginia. The crimes were reported on September 17, 2020.

The body found Thursday in a field in Pittsylvania County has been positively identified as a Raleigh man who went missing after trying to sell a car to a buyer from Craigslist, Raleigh police announced Saturday morning.

William “Andy” Banks, 39, was last seen the afternoon of Saturday, Sept. 12, after his family said he was meeting someone in the K&W Cafeteria parking lot at Cameron Village in North Carolina about selling his 2011 Silver Range Rover Sport.

Merritt allegedly used a gun to threaten Banks and steal the Range Rover, according to arrest warrants from Wake County, ABC11 reports.

During the alleged theft, “the life of William Anderson Banks Jr. was threatened and endangered,” the warrant states.

When police searched Merritt's home, they found a handgun, boxes of ammunition and two spent shell casings, the warrant says.

One of Banks’ friends called 911 on Saturday to report him missing after not hearing from Banks for six or seven hours, according to a recording of the call provided by Raleigh police.

The caller said Banks had planned to meet someone in the parking lot of K&W Cafeteria on Woodburn Road at 2 p.m.

His phone was later found on the side of a road in North Carolina.

on September 19, 2020
Email ThisBlogThis!Share to TwitterShare to Facebook
Labels: AbateTheHate