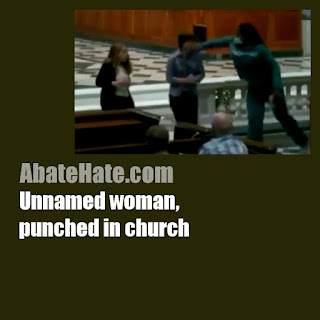 DAILYKENN.com -- A lector at a Catholic church was punched in the head as she stepped down from the church's podium.

The incident occurred at Cathedral Basilica Of Saints Peter And Paul in Philadelphia. It was reported on Sunday, August 23, 2020.

News reports failed to identify the victim or suspect. No motive was reported for the incident.

It is not known if the attacker is a racist, an anti-Catholic religious bigot, an Islamic terrorist, has a personal grudge, is mentally ill, or was on drugs. What we do know is this: Had the attacker been a member of the Ku Klux Klan, there would have been a media firestorm.

What do you think? Why does the media vilify the Klan as anti-Catholic, even though some groups included Catholic members, while ignoring real-time attacks against Catholics in Nigeria by Islamic hate groups?

A woman is caught on camera socking a lector in the face during mass at the Cathedral Basilica of Saints Peter and Paul. The disturbing act of violence took place in the sanctuary while the 11 a.m. service was being livestreamed. The suspect remains at large.

Parishioners inside the cathedral witnessed the attack as well as thousands of people who were watching it on the livestream. Those who regularly attend mass there say they have seen the woman at the cathedral in recent weeks, but the rector says he doesn’t recognize her.