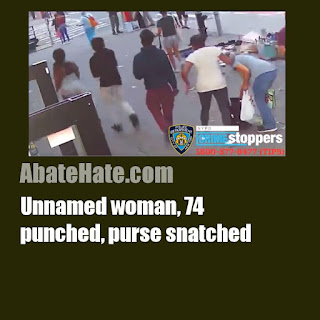 DAILYKENN.com -- A 74-year-old woman was punched in the head after she confronted a group of teens, one of whom snatched her purse.

SHOCKING VIDEO: A 74-year-old woman was punched in the face when she confronted a group of teens for snatching her purse on a Manhattan street, police say

The crime occurred in Manhattan in New York City. It was reported on Sept. 6, 2020.

When the woman noticed her purse was gone and tried to confront them, another boy in the group spun around and sucker punched her in the face, police said.

Surveillance video shows the moment the hit sent the woman falling to the sidewalk as the teens dropped the purse and ran away, fleeing in an unknown direction.