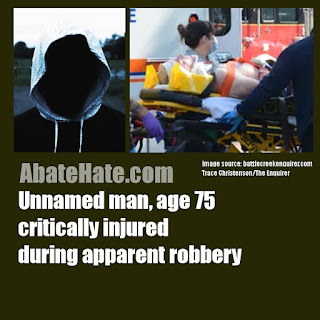 DAILYKENN.com -- An unnamed 75-year-old man suffered a critical head injury when he was struck by a vehicle driven by a robbery suspect.

Reports say the man was pumping gas in Battle Creek, Michigan when he was approached by a light-skinned black male asking for money. The suspect, about 30-years-old, "had been asking others at the station for money" when he approached the victim.

The suspect tried to flee in a white Lincoln Town Car.

"The victim grabbed the car and was dragged into the street before falling to the ground and being hit by the rear wheels, and suffering a head injury," according to battlecreekenquirer.com.

The incident occurred in broad daylight on Friday morning, September 25, 2020.

A 75-year-old man was taken to Bronson Methodist Hospital in Kalamazoo and is in critical condition Friday afternoon after he was injured in a robbery and hit and run crash.

Battle Creek police were called at 10:25 a.m. Friday to Goguac Street just west of Capital Avenue Southwest. Officers said the victim was in the street and a car involved had left.

Police said they have determined the victim was getting gas at the corner station when a man of about 30 years old, who had been asking others at the station for money, approached the older man.

Police said they believe the young man attempted to rob the older man and then flee in a white Lincoln Town Car. The victim grabbed the car and was dragged into the street before falling to the ground and being hit by the rear wheels, and suffering a head injury.
Later a Calhoun County Sheriff Department deputy located the car on Freedom Lane, but officers have been unable to identify the owner or the suspect, described as a light skinned black male, about 5 feet tall and wearing a grey hooded sweatshirt, blue jeans and possibly white tennis shoes.