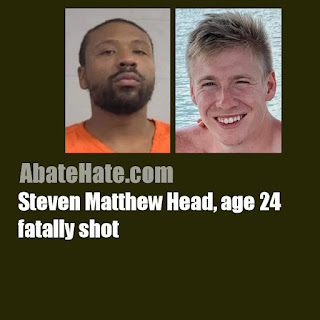 DAILYKENN.com -- Steven Matthew Head, age 24, was one of three men fatally shot in Louisville, Kentucky by a gunman wearing a 'Justice for Beonna Taylor' shirt.

Head died in the hospital after being shot at  Bungalow Joe’s Bar and Grill. The crimes occurred Friday, September 18, 2020.

Louisville Metro Police officers responded to the bar, located on Beulah Church Road, around 11:30 p.m. Two of the men who were shot, Toreon Jermaine Hudson, 26, and William Scott Smallwood, 48, were pronounced dead at the scene, according to the Jefferson County Coroner's Office. The other victim, Steven Matthew Head, 24, died from his injuries at University Hospital.

Michael E. Rhynes Jr., 33, was arrested just after midnight Saturday after police found him crawling in brush near the restaurant, according to Rhynes' arrest report. Police said Rhynes' clothing matched the clothing of the suspect caught on video and that he had a handgun loaded with several rounds that were manufactured by the same company that made the shell casings found at the scene.
Michael E. Rhynes Jr.

Rhynes faces three counts of murder and is scheduled to be arraigned in court on Monday.

on September 22, 2020
Email ThisBlogThis!Share to TwitterShare to Facebook
Labels: AbateTheHate