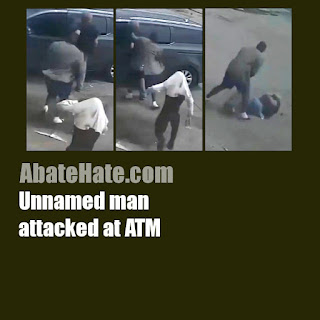 DAILYKENN.com -- An ATM serviceman was assaulted from behind and robbed in Houston.

The incident occurred in broad daylight on September 11, 2020 and was published September 23, 2020. It was captured on video.

• Meanwhile, the far left is working tirelessly to diversify your community with criminals as if it were a moral imperative. Resistance to diversification is considered inherently evil. Those who dare opposed are vilified as they were the criminal class.

Do Americans have the right to safe and secure communities? Or must we capitulate to the far-left's misrepresentation of equality and social justice?

Houston police are searching for the men responsible for attacking and robbing an ATM repair technician who was servicing a machine at a convenience store.

The victim told officers he was leaving the store when he was suddenly attacked from behind.

One suspect pushed the victim to the ground, hit his head and went through his pockets, while two other men searched the victim's vehicle.

One of the men managed to take the victim's concealed handgun, but once they realized the man didn't have any money, they ran back to their vehicles and fled.

They drove off in a white van and a black Dodge Charger, according to police. The white van was located and recovered by officers shortly after. It had been reported stolen.

One suspect is described as a Black male around 23 to 28 years of age. He stands around 5'6 to 6'1 feet tall and weighs about 170 pounds. He was last seen wearing Nike sandals, a gray coat and blue shorts.

The second suspect is described as a Black male around 20 to 26 years of age. He stands around 5'5 to 5'10 feet tall and weighs about 140 pounds. He was last seen wearing a white shirt with black shorts and black sandals.

The third suspect is described as a Black male around 25 to 30 years old. He stands around 5'6 to 6'0 feet tall and weighs about 180 pounds. He was last seen wearing a light blue shirt, blue shorts and black sandals.

on September 23, 2020
Email ThisBlogThis!Share to TwitterShare to Facebook
Labels: AbateTheHate