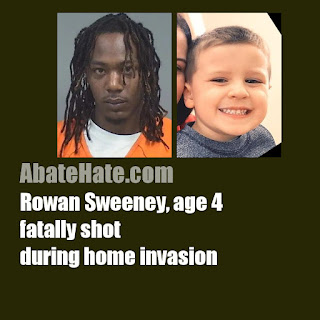 DAILYKENN.com -- Rowan Sweeney, age 4, was fatally shot during a home invasion in Ohio.

Reports say a gunman burst into a home, began shouting, and opened fire.

In critical condition are Yarnell Green Jr, 30 and 20-year-old Andre Stephon McCoy Jr. One suffered a gunshot wound the head. The other was shot twice in the back.

The home invasion occurred in Struthers, Ohio about halfway between Cleveland and Pittsburgh, Pennsylvania. The crimes were reported September 21, 2020.

The shooting killed a 4-year-old boy and hurt four others — two men and two women. The men have serious injuries and the women, including the boy’s mother, are in stable condition.

Roddy said the adult victims are still in the hospital. There are no updates on their conditions at this time.

Late Monday, Roddy said they made an arrest in the shooting.

Kimonie Bryant turned himself in to authorities at the federal building in downtown Youngstown.

Roddy identified the deceased child this afternoon as four-year-old Rowan Sweeney. He died in the arms of his mother, 22-year-old Alexis Scheider, who was also shot.
Struthers Police Chief Tim Roddy gives a press conference on the investigation into the shooting on Monday
...
Yarnell Green Jr, 30, and 20-year-old Andre Stephon McCoy Jr were in critical condition at St. Elizabeth Health Center, one of them suffering from two gunshot wounds to the head and the other from two gunshot wounds to the back.