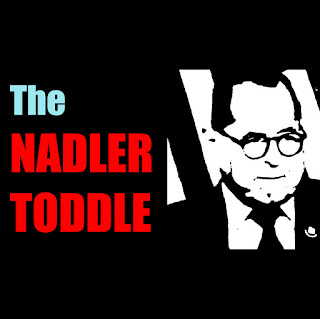 DAILYKENN.com -- Rep. Jerry Nadler toddled away from the speaker's stand on a platform where Rep. Nancy Pelosi was holding a press conference.

Serious queries on Twitter wondered if he injured his foot.

Others were concerned that his balance was due to brain damage or some other neurological issue.

"This is pitiful to watch.  As much as I despise this man, I still feel sorry for him," one person wrote.

A few saw the toddling as evidence for term limits.

"A great ad for term limits," some wrote.

Nadler has been a U.S. Congressman for nearly 30 years.

"This is just so sad- politicians need to know when to step down," wrote one individual.

"Step down? He can't even step sideways," another replied.

"But maybe not a great ad for Depends," someone joked.

Another quipped, "He shat the stage. He was just trying to limit the 'fallout', as it were. lol."

"Something wrong with you guys.  Nadler has had health (physical) issues for some time.  His mind is fine.  So if he goes to a wheelchair will ya'll feel better?"

• Do we have too many dinosaurs in congress?

• Should their be term limits imposed?

• What do you really think ails Mr. Nadler?

• "Nadler was born into a Jewish family in Brooklyn," according to wikipedia.com.

• He had a "medical episode" while appearing with New York City mayor Bill de Blasio.

Jill Biden: What she knew about Hunter Biden

Celebs who back Trump