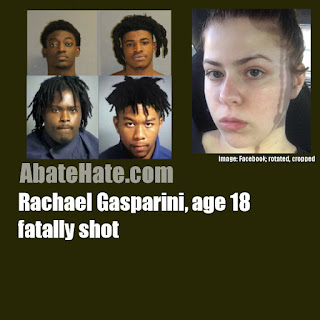 The crime occurred at an apartment complex on September 18, 2020, in Daytona Beach, Fla.

Multiple units responded  just after 5 p.m.  with 9-1-1 calls reporting anumber of shots fired. They arrived to find Gasparini on the ground but still alive. Witnesses and neighbors, along with officers,  were applying pressure to her wounds when paramedics arrived.  She was alert and conscious but suffered multiple gunshots wounds to her upper body.  Gasparini was transported to Halifax Hospital but died from her wounds at 5:48 p.m.

Witnesses told DBPD that the black male suspects fled the area in a  green in color vehicle. A BOLO was issued  and Holly Hill officers located the vehicle near 6th Street and Commercial Drive.  Three suspects abandoned the vehicle and fled on  foot. K-9 officers deployed their K-9 partners and they were caught quickly in the 700 block of Grove Avenue in Holly Hill.