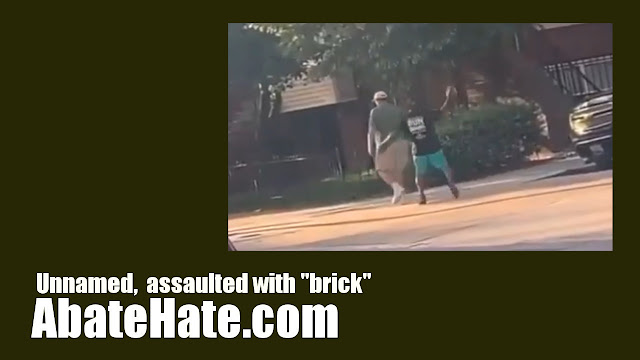 DAILYKENN.com -- An unidentified man was struck in the head with a brick in Baltimore.

The brazen and brutal assault was video recorded as bystanders laughed with amusement.

Police are seeking the identifications of both attacker and victim.

A copy of the video has gone viral on the Internet. Had the incident not been video recorded, few would know it occurred.

The advent of the Internet coupled with the proliferation of video devices has brought the brutal reality of violence in black neighborhoods to the forefront of the American putative Weltanschauung.

• When I attended a black-majority high school fifty years ago, such attacks were common. Few knew they occurred. One incident occurred in the school cafeteria where hundreds of blacks were cheering on a beat-down. When a police officer attempted to intervene (yes, we had city police assigned to the campus), he was struck in the back of the head by a chair tossed by a black male. The policeman disappeared from campus for a few weeks, then returned to duty with a bandage covering the back of his head.


A brute cold-cocked a man walking along a Baltimore street in a caught-on-video attack that has gone viral, according to reports.

The shocking footage shows the assailant running up to the victim from behind Sunday evening and then striking him in the head with the brick, sending him headfirst to the pavement.

The assault happened after a “loud argument” between two men, according to a statement from an unnamed witness included in a police incident report.

The witness told investigators that as one of the men walked away, the other grabbed a couple of bricks and struck him with one.

Police responded at 6:40 p.m. to Hamburg Street in the Sharp-Leadenhall neighborhood, the Baltimore Sun reported.

on September 01, 2020
Email ThisBlogThis!Share to TwitterShare to Facebook
Labels: AbateTheHate