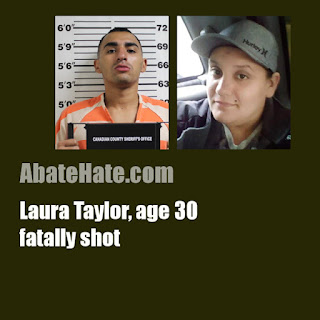 DAILYKENN.com -- Laura Taylor was working for income when approached by an alleged thief in Oklahoma City.

Reports say 30-year-old Taylor followed George Lorenz Way out of the 7-Eleven store, apparently to see which direction he would flee. It was there in the parking lot that she was fatally shot.

21-year-old Way has been charged with first-degree murder and robbery or attempted with a dangerous weapon, according to the Canadian County Sheriff's Office website.

According to police, the shooting was reported at about 2:30 a.m. at a 7-Eleven at Southwest 15th Street and Mustang Road. Police said one person fired multiple rounds outside the store, where some sort of struggle occurred between the shooter and the store clerk, later identified as Laura Taylor.

Taylor was found dead in the parking lot, according to police. Investigators said she appeared to have been shot to death during a robbery of the store.

Police confirmed with KOCO 5 late Thursday night that a man, later identified as 21-year-old George Lorenz Way, was arrested at about 1:30 p.m. Officers went to an apartment complex in the 11500 block of Southwest 15th Street, where Way peacefully surrendered to them.

According to police, the suspect heard that officers were in the complex looking for him, so he called his attorney. His attorney then called authorities, saying that he was going to surrender peacefully.

Way has been booked into the Oklahoma County Jail on complaints of murder in the first degree and robbery with a dangerous weapon, police said.

Friends of Laura Taylor and the community of Yukon are shaken up over her death.

“You think going to work is a safe thing. You just never know when things are going to happen,” said Monica Pickens, who dropped off flowers and prayed for Taylor.

According to police, Taylor chased the suspect out of the store, when he shot her.

“It’s not unusual for a store clerk to do that to see which direction a person was fleeing,” Knight said.

on September 05, 2020
Email ThisBlogThis!Share to TwitterShare to Facebook
Labels: AbateTheHate