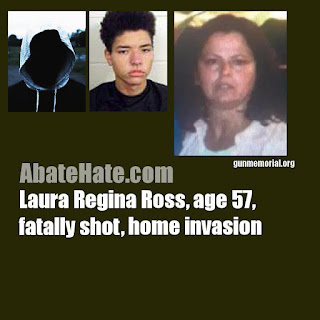 DAILYKENN.com --Laura Regina Ross, 57, was fatally shot when a group of juveniles invaded her home in Floyd County, Georgia.

Charged is Tyree Kozel Daniels, 18, and an unnamed 16 year old.

The back door to the home was kicked in and during the commission of a home invasion Ross was shot to death.

Fincher said a group of juveniles went to the Ross home that night looking to pick a fight with another youth when they broke into the residence.  Ross was shot twice.

She was able to call 911 late that Monday night but she was in such a condition that emergency dispatchers could not immediately ascertain what the problem was.

Floyd County police were sent to the home on Baker Street in Shannon and discovered the woman had been shot. She succumbed to her wounds around 4 a.m. the next day.

Fincher said police got a strong lead Friday and spent most of the afternoon and late into the evening working that lead which resulted in the two arrests.

Floyd County police are asking the public for help after a 57-year-old grandmother was shot and killed earlier this week.

On Monday, Laura Regina Ross called 911 and quickly hung up, the department said in a news release. When officers arrived at her home to check on her, she was lying on the ground with a gunshot wound.

The critically injured woman was taken to a hospital, where she died.