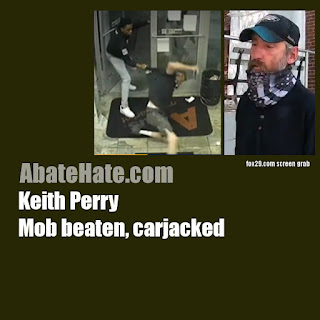 DAILYKENN.com -- Keith Perry was harassed by a mob, beaten, then carjacked.

The crimes occurred at a gas station west of Philadelphia and were captured on surveillance video.
Police believe that four suspects were casing the Sunoco convenience store, looking for a victim. They apparently decided to attack Perry because he was alone.
From fox29.com ▼

A brazen attack is caught on camera at a Delaware County gas station.
...
Cameras at the East Lansdowne Sunoco captured the moments four people approached him while filling up around 2:30 in the morning on September 1st.

He ran inside the store to get help and police say he was attacked, his keys stolen out of his pocket, and the group left in his car.
...
Detective Sgt. Cadden says this group of what appears to be teens do not know Perry. He says cameras show them visibly casing the parking lot for the right person and moment.

“They scoped out and picked out numerous other victims, but for one reason or another, did not move on them, until they saw this one man by himself and they attacked,” Detective Sgt. Cadden added.

on September 20, 2020
Email ThisBlogThis!Share to TwitterShare to Facebook
Labels: AbateTheHate