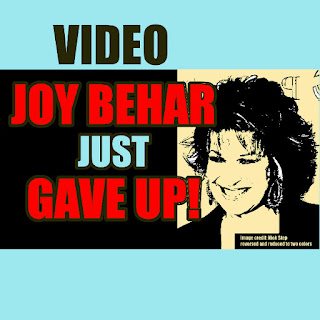 She was referring to the United States Supreme Court.

"We" apparently referred to Democrats.

Democrats should take on winnable fights, such as control of the U.S. Senate.

Her observation was prompted by a question from co-host Whoopi Goldberg.

“We were talking about the replacement for Justice Ginsburg,” Goldberg began. “Joy, what’s your feeling?”

“You know, I was thinking about the Supreme Court, because we’ve lost that battle,” Behar responded.

“I don’t want to talk about the Republicans anymore. We’ve lost the battle. That doesn’t mean we lost the Senate.”

“These are the states up for grabs Colorado, Georgia, Iowa, Maine, Montana, North Carolina, South Carolina and Texas.”

McCain is the daughter of the late U.S. Sen. John McCain. Although a Republican, she is not known for conservative views.

Behar then played the race card.

“I don’t have to worry about the Supreme Court that much because I’m white,” she said.

“It’s for those people who are not privileged that we have to worry about,”she later added.

Apparently, Behar does not realize that we're all privileged to lives in America.

“I’m post menopausal so I can’t get pregnant, thank God.”

“... talking about the woman who has the seven kids,” Goldberg said.

“No one’s going to accuse her of anything. And I haven’t really seen people going after her for her religion.”

She has an estimated net worth of $30-million and an annual salary of $7-million, according to celebritynetworth.com.

Her estimated net worth is $60-million and her annual salary is $8-million, according to celebritynetworth.com.

Unnamed boy, age 15 slashed from behind