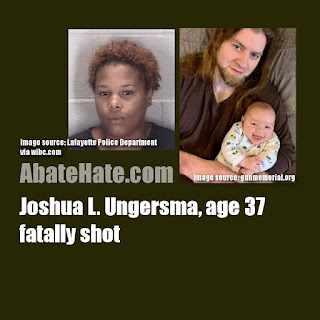 Arrested after the shooting deaths of Joshua L. Ungersma, 37, and Alberto Vanmeter, 19 is Jaelynn Billups.

Robbery appears to have been the motive.

Police responded to a “shots fired” run in a residential area in the 1900 block of North 16th Street just after 11 p.m. Monday and discovered the two men dead in the road. Billups was located at the scene.

The Tippecanoe County Coroner’s Office has identified the victims as Joshua L. Ungersma, 37, and Alberto Vanmeter, 19, who are both from the Lafayette area.

Police on Tuesday afternoon declined to provided additional details about the circumstances behind the shooing.

on September 04, 2020
Email ThisBlogThis!Share to TwitterShare to Facebook
Labels: AbateTheHate