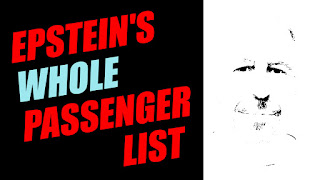 DAILYKENN.com -- Who knew who flew with billionaire and now-deceased pedophile, Jeffrey Epstein?

Until now, the canon of passengers flitting about on Lolita Air has been largely hidden. But the flight logs have been subpoenaed and could soon be public record.

Reports say the news is "sparking fear among the rich and famous who partied with the pedophile" as Prince Andrew may soon have lots of company.

Who's behind all this? None other than The Attorney General in the US Virgin Islands. That's where Epstein's island was located.

The flight logs include "four helicopters and three planes span from 1998" until 2019 when Epstein's life was terminated, according to dailymail.co.uk.

All are presumed innocent of any wrong doing until proven guilty in a court of law.

But what about the court of public opinion?

Pity the poor souls whose names are on those flight logs. Innocent though they may be, expect the mainstream media bloodhounds to be hot on their trails exposing all to public scrutiny. And you know how unsympathetic the public can be.

Alleged victims of Epstein seem to be behind the deep-dive investigation.

Are the alleged victims truly victims? Or are they merely seeking a heft retirement, compliments of Epstein's estate and the dead billionaire's deep-pocketed associates?

Unnamed boy, age 15 slashed from behind