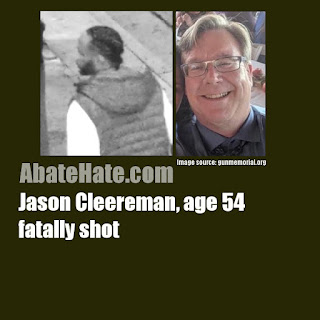 DAILYKENN.com -- Jason Cleereman, a 54-year-old immigration attorney was fatally shot in the head in Milwaukee, Wisconsin.

Reports say Cleereman was a passenger in a vehicle driven by his wife. While stopped at a traffic light the victim was punched through on open window by a man on bicycle.

Cleereman exited the vehicle to confront the attacker and was subsequently shot in the head.

There is no evidence that the bicyclist, who is black, attacked Cleereman because he is white. But we presume that may have been the motive.

"It seems like it was just somebody who was in a rage, and Jason just happened to be at the wrong place at the wrong time," friend Pat Prabhu said according to wisn.com.

Milwaukee police have released images of a suspect in the homicide of an area immigration attorney.

Police said that the unidentified suspect is wanted for a homicide of immigration attorney Jason Cleereman,54, that happened in the 1700 block of N. Holton Street on Tuesday.

The suspect, believed to be between the ages of 30 to 35, was last seen wearing a black hooded vest, white t-shirt and jeans. He was riding a dark-colored bike and was armed with a gun.

According to police, the suspect was involved in an altercation with Cleereman when the bicyclist then fired shots at Cleereman, killing the 54-year-old. Jason's wife, Evanjelina Cleereman witnessed the shooting. She said her husband got out of his car to talk to the bicyclist prior to being shot.

on September 25, 2020
Email ThisBlogThis!Share to TwitterShare to Facebook
Labels: AbateTheHate