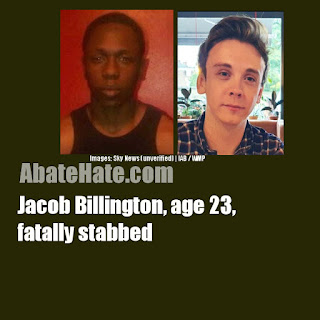 Billington was one of eight victims of a stabbing spree that occurred in the early morning and lasted for about two hours. The other seven victims survived.

Accused of murder and attempted murder is Zephaniah McLeod, 27.

"Three people arrested on suspicion of assisting the suspect were released earlier on Tuesday pending investigation," according to skynews.com.

Another man, aged 30 stabbed in Livery Street and a 22-year-old woman, attacked in Hurst Street, remain critically injured in hospital. Four others, three men and a woman were also injured.

Detectives worked around the clock securing CCTV footage and speaking to witnesses, and this morning a 27-year-old Birmingham man was arrested from his home address in Selly Oak.

He remains in custody on suspicion of murder and seven counts of attempted murder. Three other people, two men and a woman, were arrested from the same address on suspicion of assisting an offender.

on September 09, 2020
Email ThisBlogThis!Share to TwitterShare to Facebook
Labels: AbateTheHate