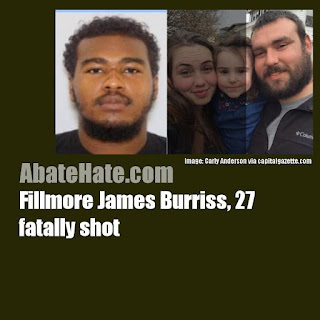 DAILYKENN.com -- Fillmore James Burriss, 27, was fatally shot at an outdoor family gathering after being approached by a group of three males, reports say.

The media claims "an argument" ensued that led to a fight that ended in a fatal shooting.

Apparently, the family were video recording the event. The three males used that as an excuse to confront the family.

Police obtained a warrant charging Khiry Dewann Queen, 21, with second-degree murder, assault and other charges in the Sept. 12 death of Fillmore James Burriss.

Witnesses told police Burris, 27, was shot at an outdoor family gathering on Kent Road that ended in an argument. As it ended, three men approached them and another fight ensued. Police said Burriss was shot in the upper torso.

on September 22, 2020
Email ThisBlogThis!Share to TwitterShare to Facebook
Labels: AbateTheHate