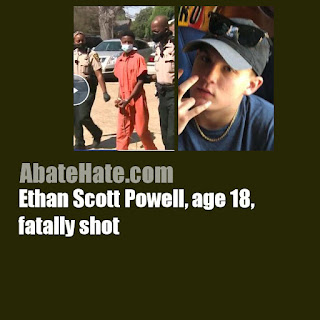 Suspect "15-year-old Kemond Urell Jones turned himself in to the sheriff’s department," according to wlbt.com.

“Just pray for both families. Hoping everything comes out okay on both ends.”

Those were the words of Dontae Jefferson as he talks about the shooting that took place in his neighborhood Sunday night. Sheriff Martin Pace says a call of shots fired on Abraham Drive came out just after midnight.

“When units arrived on the scene actually only about four minutes after the call was dispatched, they found an 18-year-old male lying in the street suffering from multiple gunshot wounds,” Pace said.

That 18-year-old was Ethan Powell. Pace says there had been an argument earlier in the evening that led to the shooting. Jefferson says it’s just not what he expects from his neighborhood.

“Normally, it’s pretty quiet... kids outside riding bicycles and playing basketball and things like that,” Jefferson said. “A really quiet and good neighborhood.”

Pace says he and his deputies spent the night trying to find out who the shooter might be. And Monday afternoon, 15-year-old Kemond Urell Jones turned himself in to the sheriff’s department.

“He has been charged with murder because of the state statute on a murder charge,” Pace said. “He will be charged as an adult and held in the adult jail.”