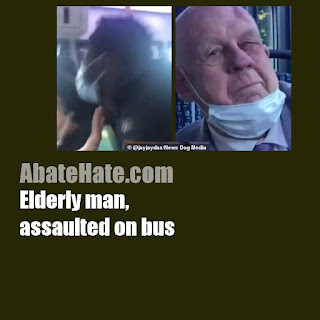 DAILYKENN.com -- An elderly man was assaulted after apparently standing up to bullies on a bus in London.

The group appears to be speaking with African accents. Passengers encouraged the group to get off the bus, but they refused, fearful of being arrested due to systemic racism or, as one was quoted as saying, "You know how the system is."

One of the suspects prompted the pensioner to call him a monkey, then used that a pretext for the assault. A member of the group is heard using hate speech by calling the white man a "racist." Apparently, the pejorative "monkey" is unacceptable, but the pejorative "racist" is permissible.

It appears the incident began when the group crowded the elderly man rather than taking seats.

Accusations that the man "racially abused" the group prior to the assault is not born out in the video.

A report from dailymail.co.uk seem to take an apologetic stance in defense of the group, as if an elderly retiree would pick a fight on a bus with a group of Africans simply because he is a racist.

The woman who video recorded the incident reportedly said, "Everybody on the bus suggested us leaving. They all already know how the system is. We would have been arrested."

• When whites are attacked by blacks, the media routinely spins the story to portray the victims as the aggressors. This was seen in the Trayvon Martin incident, the Michael Brown incident and, more recently, the George Floyd incident.

• What do you think? Should an assault be considered a hate crime if the attacker uses the pejorative, "racist"?

• Do you agree that whites are vilified as aggressors when they defend themselves against black aggression?

• Why would Africans want to live in Western nations that are rife with systemic racism?

• Do you believe an elderly retiree would pick a fight with a group of Africans because he is a racist?

The video was posted by Instagram user @jayjaydax who claimed that the man had racially abused the group of young passengers prior to the fight - calling the group 'monkeys' and 'n******'.

She wrote: 'We had just gotten on the bus, we decided to stand because the back had a couple people. My cousin was leaning on the hand bars and the man randomly pushed his elbow off. So he did the normal thing and turned around confused and asked, ''Why did you push my arm off?''

'The man then replied by shouting don't talk to me you monkey which is when my friend turned around and said what did you say.

'We were all so shocked and then the man proceeded by shouting ''Stop talking to me you monkeys, f*** off'' repeatedly.

She claims that another passenger on the bus reported the elderly man to the bus driver who called the police.

But she adds: 'The bus driver called the police on the white man but they clearly didn't get there in time. The man then began calling us n***** and saying we shouldn't be on the bus. He then kept coming forward as if he was going to push us.

'But then as you can see in the video, he ended up actually swinging for my friends which is why they hit him. It was simply self defence.'

The camerawoman said that the other bus passengers advised that the group leave the scene before the police arrived at the incident: 'Everybody on the bus suggested us leaving. They all already know how the system is. We would have been arrested.'

At the start of the clip, a young male in the group asks the old man: 'So we're all monkeys? I'm a monkey yeah?'

In the next clip, the black passenger vows to hurt the pensioner but his friends attempt to restrain him and beg him not to fight.

However, the young male continues raging and says: 'I'm going to f*** you up! Get off the bus!'

Hearing this threat, the furious pensioner gets up from his seat and starts to approach the younger man.