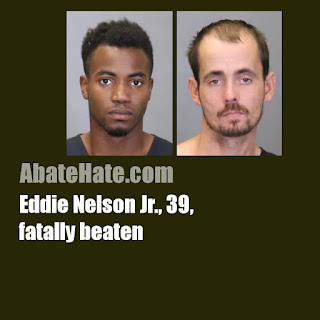 DAILYKENN.com -- The black male accused of stabbing a white AutoZone worker is now a suspect in the fatal beaten of a white jail inmate.

Jayvon Hatchett, 19, was arrested after allegedly walking into a Columbus, Georgia AutoZone on August 25, 2020 and stabbing an employee [source]. The employee was hospitalized in critical condition.

Hatchet was arrested and jailed. Less than two weeks later he allegedly beat 39-year-old Eddie Nelson Jr. to death while the two were incarcerated at Muscogee County Jail.

The beating victim was jailed for violating probation.

• We can presume without certainty that Hatchet has assaulted other whites in the past without being caught.

• We are incessantly reminded that hooded white men on horseback randomly assaulted and lynched black males in the past, though such reports are largely unsubstantiated by documented history. Black-on-white attacks, however, occur in real time and are documented almost daily at abatehate.com. Still, whites are portrayed (and betrayed) as racist aggressors and blacks are elevated to demagoguery status as being oppressed.

• Black Americans seem unaware that they enjoy the highest living standard of blacks worldwide; particularly those stranded in sub-Saharan Africa. They seem unaware that their privileged status includes the inventive innovation of Western people. Nearly everything that enhances the lives of every human everywhere was invented by white people. These inventions include most everything from light bulbs to automobiles to healthcare products.

A Muscogee County Jail inmate was found beaten to death early Saturday morning in his cell, according to the assistant coroner.

“It was an apparent beating by another inmate,” Newton said. “He had blunt force trauma around the head and neck.”

Jayvon Hatchett, 19, is suspected the in the beating death, Sheriff Donna Tompkins said when contacted by phone. She said the incident was under investigation by the Sheriff’s Office and no additional details would be released at this time.

Nelson was being held on a probation violation, according to jail records.

Hatchett was in jail without bond after being accused in the Aug. 25 racially motivated AutoZone stabbing on 32nd Street.

Columbus Police Sgt. R.S. Mills told a Recorder’s Court judge that when he asked Hatchett why he stabbed the AutoZone employee, Hatchett said he “felt the need to find a white male to kill” after watching videos of police brutality happening across the country.

Hatchett, 19, was charged with aggravated assault and possession of a weapon during the commission of a crime in the AutoZone stabbing.

on September 07, 2020
Email ThisBlogThis!Share to TwitterShare to Facebook
Labels: AbateTheHate