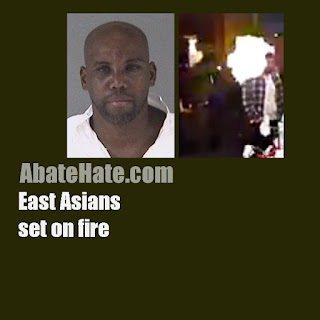 DAILYKENN.com -- A male was video recorded attempting to set a man on fire at a boba shop in Berkeley, California, it appears.

One of the attacks took place outside of Artichoke Basille’s Pizza, at 2590 Durant Ave. (at Bowditch Street), while two men were eating. A stranger approached them, White said in a prepared statement, “knocked their food off of the table and announced that he was going to light them on fire.” McGlone sprayed the men with WD-40, a flammable liquid, as they walked away, according to BPD.

A person who claimed to be a friend of one of the victims claimed the video-recorded attack at the boba shop was “no big deal.”

“[M]y friends got set on fire. no big deal,” she wrote. And later posted, “...please stop bringing race & hate into this.”

FULL STORY. please stop bringing race & hate into this. what the man did was fucked up but we also don’t know what happened beforehand and what caused him to attack us like that. pic.twitter.com/LxbjedHhlS

• The cultural-Marxism version of Emily Post has determined it socially discourteous to hold black people accountable for crimes, including setting your friends on fire.

It is not known if the woman who posted the Twitter messages is actually knows the victims or is a stranger attempted to defuse a potential backlash against black racism.