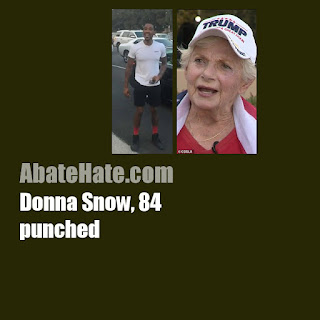 DAILYKENN.com -- Donna Snow, 84, was allegedly one of at least three people assaulted during Trump gathering in Aliso Viejo, California.

The other two known victims are aged 55 and 74.

The suspect reportedly approached the gathering as they peacefully rallied for the reelection of President Donald Trump on a street corner.

Reports say the suspect, identified as Alvin Gary Shaw, 33, "was released from jail on Thursday after posting bail. According to the Orange County Sheriff's Department, Shaw works for the US Postal Service."

• What do you think? Will Shaw be fired due to his alleged violent behavior? Recall the Central Park "Karen" who had the audacity to call police on a black male lost her job shortly after the incident was made public.

• What do you think? How would the media respond if a white postal worker were to assault elderly black people at a Biden rally?

A California man has been arrested after he allegedly attacked several people, including an elderly woman, during a rally held in support of President Donald Trump on Wednesday night.

Alvin Gary Shaw, 33, confronted the small group of people during the gathering in Aliso Viejo - 50 miles south of Los Angeles - around 6.30pm.

Shaw allegedly blew smoke in some of the supporters' faces and used his cigar to burn one person's Trump sign, according to local reports.

He also reportedly punched two people, including an 84-year-old woman, and knocked a third person to the ground before he was taken away in handcuffs.
...
Witnesses say he blew smoke in their faces and used his cigar to burn one supporter's Trump sign.

That's when the altercation turned violent with Shaw accused of striking three people, aged 55, 74 and 84-year-old Snow.
...
Shaw was arrested on suspicion of elder abuse, assault with a deadly weapon and assault and battery.