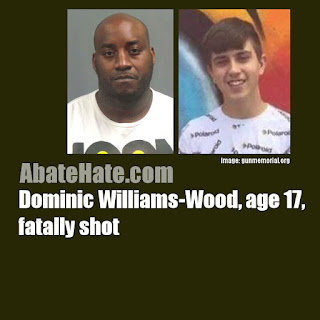 DAILYKENN.com -- Dominic Williams-Wood, 17, was fatally shot after a confrontation at a restaurant. Reports say the victim followed a car driven by 30-year-old Cartez McKire Jr.

McKire allegedly shot the teen as his vehicle approached. He has been charged with second-degree murder.

Officials with the Jefferson County Sheriff's Department said it all started with a confrontation at a restaurant in Fenton. Dominic Williams-Wood and two of his friends followed a car from Fenton to a subdivision in High Ridge late Friday night.

By the time they approached the person they were following, he was already out of the car and was standing waiting. Police said 30-year-old Cartez McKire Jr. fired shots at the car while Williams-Wood and the others were inside. The shooting happened around 11 p.m. in the area of Sommerville Drive and Woburn Drive.

Officers found the car off the road when they got there and Williams-Wood was pronounced dead on the scene.

McKire was charged with second-degree murder and armed criminal action.