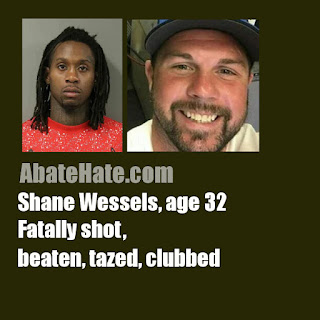 Reports say Wessels died after "a fight" with a group of individuals that involved one male and several females.

The victim's mother told who13.com, "They beat him, they tased him, they clubbed him, and there's girls involved and another guy."

Convicted and sentenced to 50 years in prison was Levi Gibbs III, 29, according to desmoinesregister.com.

It appears the jurors agreed to a charge less then first-degree murder because the victim defended himself.

This is the type of violence we hear about from fake historical narratives. The exception being: The races are reversed. We are told that white mobs routinely overwhelmed helpless blacks and brutally beat them. Real history — as well as real-time events — reveals the truth: White people are routinely overwhelmed by black assailants, without provocation. Many die from the abuse. See abatehate.com for documented accounts.

Gibbs must serve 35 years in prison before he can be considered for parole or work release, court records show. He was ordered to pay $150,000 to the beneficiary of Wessels and must have no contact with the victim's immediate family for five years.

At trial, attorneys for both sides agreed Gibbs shot Wessels, but the defense argued Gibbs did so amid a fight in which his sister was injured. Gibbs had been charged with first-degree murder but jurors opted for the lesser charge.

on September 04, 2020
Email ThisBlogThis!Share to TwitterShare to Facebook
Labels: AbateTheHate