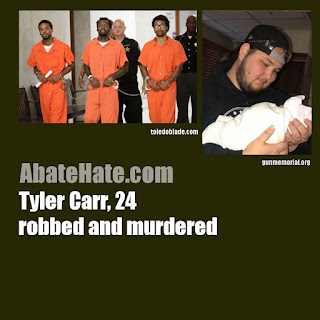 DAILYKENN.com -- 24-year-old Tyler Carr was fatally shot in the chest during a robbery in a Toledo, Ohio home.

Of four males arrested, one was found guilty of murder by a jury on Thursday, September 10, 2020. Dominique Roberts, 28, was charged with aggravated robbery and aggravated murder, according to 13abc.com.

Darion Martin pleaded guilty in January and is awaiting sentencing.

Trials for Justin Wright and Adrian Eaton are expected later this month, September, 2020.

According to 13abc.com, "Roberts and Justin Wright allegedly entered the home, pulled out guns, and went through people’s pockets."

How do you protect your home from invasion?

Why do you believe people like Carr live in high-crime neighborhoods?

Darion Martin pleaded guilty in January. He is set to be sentenced in October. Martin allegedly waited outside in a getaway car as three others, including Roberts, went inside the East Toledo residence the night Carr was killed.

The trial of Adrian Eaton is scheduled for September 28. He was arrested in Georgia by U.S. Marshals about a week after the shooting.

on September 12, 2020
Email ThisBlogThis!Share to TwitterShare to Facebook
Labels: AbateTheHate