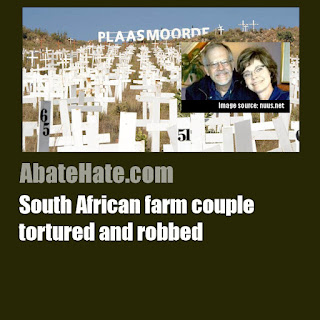 DAILYKENN.com --A 64-year-old farmer and his 53-year-old wife were brutally tortured during a farm attack that occurred September 27, 2020.

The crime occurred in Spitskop, Bronkhorstspruit, in the Gauteng province.

Six attackers overpowered a 64 year old man in his workshop, after walking up to the building as the property is not fenced in.

His wife (53) heard a Commotion and went to investigate. She was also overpowered and assaulted and tied up. The couple were then horrifically tortured by the attackers.

The man’s one leg was cut with an angle grinder. The woman’s nose was pinched in a vice grip and twisted as they requested a large sum of money they thought the couple had. The couple sustained terrible injuries, the man’s are life threatening, he also sustained skull and facial fractures and will be operated on, he was taken with a helicopter to a Johannesburg hospital, and the woman via ambulance to Witbank, where she is currently undergoing a brain scan.

Jewelry and two firearms were taken from the safe and at least two flat screen TVs as well as other valuables and the couples cell phones were loaded on the man’s Hilux bakkie.

The attackers then fled in the vehicle in the direction of the R104. The couples [sic] son had arrived home which probably alerted the attackers. His mother had managed to untie herself and ran to her son to get help. The SAPS, ambulance service and community was called and responded quickly.