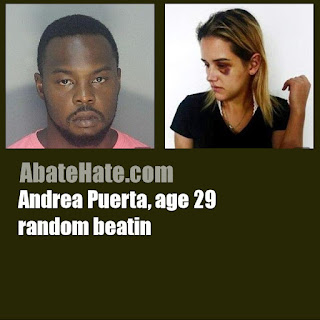 DAILYKENN.com --Andrea Puerta, 29, was beaten on Miami’s Metromover, according to local10.com.

The attack was video recorded by a surveillance camera and appears to have been random. The victim claims she had never seen the attacker before.

King is accused of attacking two other Metromover passengers the same day.

King, 25, punched Puerta, 29, more than 20 times during the Sept. 4 attack. He kicked, pushed, and slammed her headfirst. She suffered a concussion.

“I remember that I closed my hands and I said, 'STOP! STOP! He did not stop," Puerta said. “There was a moment when he said, ‘Sorry’ and I looked at him and he punched me and after that, I don’t know what happened.”

Puerta said she passed out during the beating, and she managed to walk out of the Metromover in a daze and called 911.

Officers said Puerta wasn’t King’s only victim. They are accusing him of attacking two other men in the Metromover that same day.

More than two weeks after the attack, Puerta still has a broken rib, a swollen jaw, a black eye and a bruised arm. She is worried King will strike again.

Puerta said she doesn’t know King, but she was horrified when she learned he has a daughter. She believes that a man who is that violent with a stranger in public shouldn’t be anywhere near children.