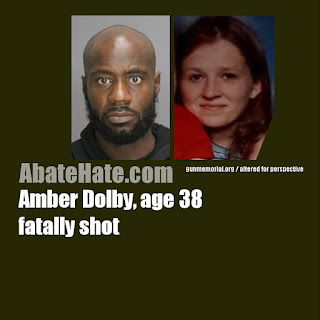 DAILYKENN.com -- Amber Dolby, 38, was found dead at an intersection in McKeesport, Pennsylvania. She had been shot in the head.

Gerald Walker, 47, is accused of homicide.

Dolby was the mother of three.

Dolby's body was found at the intersection of Rogena St. and Riverview Ave. around 5:30 a.m. Police said Dolby had a gunshot wound to the head and was pronounced dead at the scene.

Police developed Walker as a suspect and eventually found a gun he had possessed the night of the murder. Ballistics matched that gun with the Dolby bullet.

PREVIOUS STORY (April 26, 2020): Allegheny County homicide detectives are investigating after a woman was found shot to death in McKeesport on Sunday morning.

Police said they were notified of the woman’s body found at the intersection of Rogena St. and Riverview Ave. around 5:30 a.m.

The woman has been identified as Amber Dolby, 38, of Duquesne.

Police said Dolby had an apparent gunshot wound to the head. She was pronounced dead at the scene.