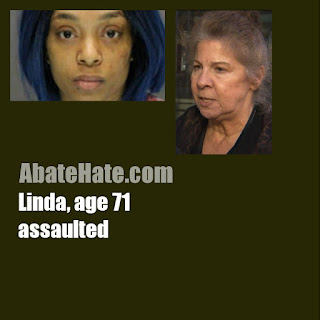 DAILYKENN.com -- A 71-year-old woman said she was punched in the head while riding the Red Line, Boston's transit system.

Identified only as Linda, the woman says she was asked to move her purse by a female. Linda refused and was subsequently punched in the head, reports say.

Arrested is 23-year-old Jada Campbell of Mattapan. "She is charged with assault, witness intimidation, and disorderly conduct," according to boston.cbslocal.com.

• Will Campbell be charged with a hate crime after calling the victim "and ugly white person."

• Was Linda being discourteous by taking up a seat with her purse on a crowded train? Did she deserve to be punched?

• Why did Jim Crow laws required blacks to sit in areas reserved especially for them?

• Do you think the socialist democratic vision of forcing us all to ride mass transit is a good idea?

“You’re an ugly white person,” she says the passenger told her.

The suspect was identified as 23-year-old Jada Campbell of Mattapan. She is charged with assault, witness intimidation, and disorderly conduct.

Linda says she felt threatened enough to move, and that’s when Campbell got down out of her seat to trip her.

“She was abusive, ranting and raving ‘I’m going to take you down and have it out,’” Linda said.  Linda got off early at Harvard Square, but the rant didn’t stop as she says Campbell followed. Two other passengers tried to step in before it caught the attention of MBTA Transit Police.

“I had two good Samaritans come off with me and they were protective. She came up and said ‘let’s have it out here and now,’ took off her earrings and threw stuff down,” Linda said.

According to police, Campbell resisted arrest and told witnesses who reported the crime, “If I see you on the streets, I’ll murder you.”

“We were all shaking afterward she was such a force,” said Linda.