DAILYKENN.com --Strolling in urban areas after dark is not wise. 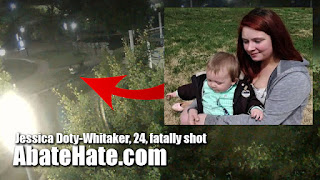 Based on images provided by police, it appears 24-year-old Jessica Doty-Whitaker was accosted by a group of blacks.

The young mother of a three-year-old responded to taunts of "black lives matter" by exclaiming, "All lives matter!"

The media reported the exchange as "an argument."

Moments later a shot was fired striking the young white woman. Doty-Whitaker was transported to a hospital where she died.

Police provided surveillance video of a black male jogging away from the crime scene. They request help identifying those in the video.

The fatal shooting occurred after dark in the 700 block of Canal Court near the downtown area of Indianapolis.


The Indianapolis Metropolitan Police Department is looking for help identifying some people that were in the area where a shooting happened early Sunday morning.

FOX59 previously reported that the shooting happened shortly before 3:30 Sunday morning in the 700 block of Canal Court. When police arrived, they found 24-year-old Jessica Doty-Whitaker suffering from injuries consistent with a gunshot wound. She was transported to the hospital in critical condition where she later died.

According to the victim’s family, the shooting started with an argument. Eventually, the two sides separated and walked away from each other, until witnesses claim the killer opened fire from a nearby bridge and ran away.

Homicide detectives have video from the area that shows multiple people in the area when the shooting happened. Detectives want to speak to anyone who was on the canal around the time of the shooting.