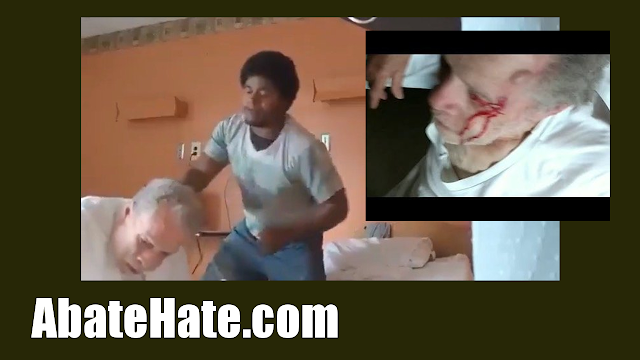 DAILYKENN.com -- A black male who was video recorded beating numerous elderly white patients at a nursing home has been arrested.

According to reports, Jaydon Hayden is a trained boxer who video recorded himself punching the patients repeatedly until the bled. Reports say he uploaded the videos to social media where they were widely circulated.


WTF Detroit nursing homes!! I cant believe no one shares this, what people ignore old women being beaten in Detroit Nursing Homes? Police is too busy arresting bussiness women and man, meanwhile 👇👇 Share 👇👇

I will beat his fucking ass. Give me one minute with this pos. pic.twitter.com/j6ZRJiAJvl
— Uncle Sam's Children (@UncleSamsNation) May 21, 2020


One report claims Hayden works at Walter P. Reuther Psychiatric Hospital. Fox News reported he is a patient at the facility.

The videos are currently viewable on bitchute. com.

Mark Dice speculated how CNN will cover the story.


This is how CNN will cover the story about the guy arrested for recording himself attacking old folks in that Michigan nursing home... pic.twitter.com/z46MLxWdcL
— Mark Dice (@MarkDice) May 22, 2020

"Is this even possible to believe?," he wrote. "Can this be for real? Where is this nursing home, how is the victim doing?"

Is this even possible to believe? Can this be for real? Where is this nursing home, how is the victim doing?
— Donald J. Trump (@realDonaldTrump) May 22, 2020

Conservative journalist Andy Ngo replied to Trump's post with a copy of one of the videos.

"It happened in Michigan," Ngo wrote. "Detroit Police have opened an investigation following an online outcry. The suspect has recorded other videos of him beating other elderly people."

It happened in Michigan. Detroit Police have opened an investigation following an online outcry. The suspect has recorded other videos of him beating other elderly people. pic.twitter.com/m1rLlkXkzW
— Andy Ngô (@MrAndyNgo) May 22, 2020

The man is filming himself beating the seniors in their beds until they are bleeding.

Judicial Watch boss Tom Fitton said the watchdog group contacted authorities after he was alerted to the disturbing videos.

“This was also posted on my Twitter feed and Judicial Watch contacted authorities who then, in response to our concern, arrested this person. Thanks to those who helped us get this done.” Tom Fitton said.

All across this nation, people know what is happening, but are so afraid of publicly admitting reality.

We all know what would have happened if this were a white nursing home employee beating an elderly black man or black woman in a nursing home, so there’s no need to resort to talking about double standards.

As we long ago pointed out here at SBPDL, there is only The Standard, a one way street for blaming not just white individuals, but all white people exclusively for racism and racial attacks.

Such attacks are likely more common than is known. Most attackers simply aren't stupid enough to implicate themselves by video recording their attacks and uploading them to social media outlets.

Here's the foxnews.com report in which race is not mentioned.

on May 22, 2020
Email ThisBlogThis!Share to TwitterShare to Facebook
Labels: AbateTheHate, elderly