DAILYKENN.com -- An 80-year-old woman lost her life after being stabbed by a man outside a store in Houston.

The suspect was 38-year-old Randy Lewis.

Lewis has 67 prior arrests and was out on bond at the time of the murder, reports say. He was killed by police moments after the crime.

"The woman he is accused of killing is 80-year-old Rosalie Cook," abc13.com reported. "Police say she was stabbed in the chest outside of her car after shopping inside the Walgreens near the corner of Gessner and S. Braeswood Boulevard."

“But the most tragedy here is a woman who has died from a guy who attacked her for no reason other than to steal from her and carjack her,” a police spokesman said.

According to click2houston.com, "The suspect was soliciting customers for money and threatening them with a knife, Police Chief Art Acevedo said in a news briefing Saturday afternoon." 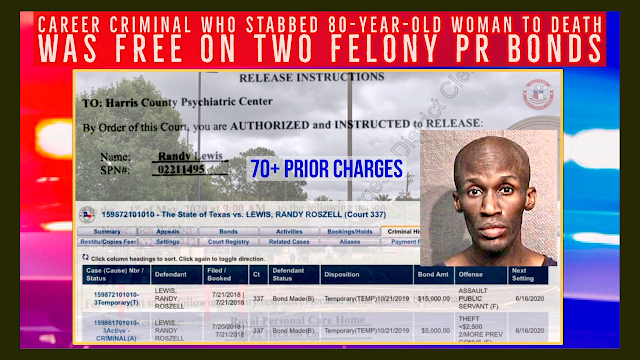 "[E]mployees at a nearby Walgreens noticed a man, who matched the description of the suspect near the Fiest Mart, lingering outside. As a woman approximately 80 years of age exited Walgreens and walked back to her car, the man stabbed the woman in the chest, Acevedo said.

"The suspect entered the woman’s car and attempted to start it. Witnesses flagged down an officer nearby. The officer exited his patrol car and ordered the suspect, still armed with a blade, to exit the car. After about 15 seconds, the suspect exited the car and pointed the knife toward the officer, Acevedo said. The officer discharged two rounds, striking the suspect.

"The suspect was pronounced dead at the scene by the Houston Fire Department.

"The woman, identified as Rosalie Cook, was transported to Memorial Hermann where she later died of her injuries." 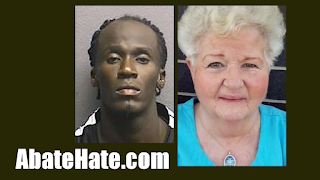 on May 19, 2020
Email ThisBlogThis!Share to TwitterShare to Facebook
Labels: AbateTheHate, elderly