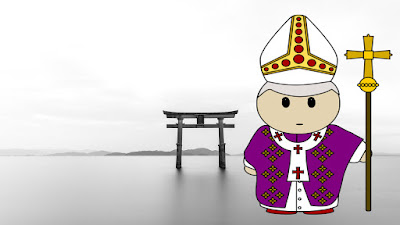 DAILYKENN.com -- Pope Francis urged Japan to open its borders to third-world invaders. His call prompted a backlash on social media as Japanese cited the horrific outcome of Europe's endeavor to accommodate "refugees."

The pope said nothing of Jacques Hamel, a priest in France who throat was slashed by Muslims during mass.

Hamel died when his throat was slit by two Muslim men, Adel Kermiche and Abdel Malik Petitjean, who both pledged allegiance to the Islamic State. The attack occurred while Hamel was saying Mass in his parish in Saint-Étienne-du-Rouvray on 26 July 2016. During the attack, Hamel said "Satan, go!" when confronted by his killers. [source]


But when he tried to gently encourage the Japanese to extend a hand of friendship to refugees, the backlash on social media was significant.

Japan has some of the toughest policies toward refugees and asylum seekers among the world's richest nations, and a reputation for being relatively closed toward outsiders. The pope's effort to preach a more accepting message was not universally accepted.

"In a special way, I ask you to extend the hand of friendship to those who come here, often after great sufferings, seeking refuge in your country," he said, in a speech to a group of 900 mostly young people, including some Kurdish refugees.

"Indeed, a small group of refugees is present with us here, and your kindness to them will show that they are not strangers. Not in the least, for you regard them as brothers and sisters."

The story was one of the most read on the TV Asahi website on Tuesday and Wednesday and tweets with the words "accept refugees" were trending.

But the response seemed more negative than positive.

A college student with the handle @aign1218 tweeted: "There is little we can do as we don't have a system to support them. Japanese people have only negative images of refugees. It would be impossible unless that is addressed."

Others highlighted Japan's other social problems, including the costs of coping with a rapidly aging society, but some were more blunt in rejecting the pope's message.

After seeing the flood of negative comments, a group of volunteers who support asylum seekers detained at a facility in Ushiku north of Tokyo called on Twitter to act.

"Tweets that would inflame refugee-phobia, xenophobia are growing, @TwitterJP should deal with it as its own platform has been used to inflame xenophobia," they wrote on their account @freeushiku.