Home » »Unlabelled » Trump's largest support base is: WHITE EVANGELICALS (but why?)

Trump's largest support base is: WHITE EVANGELICALS (but why?) 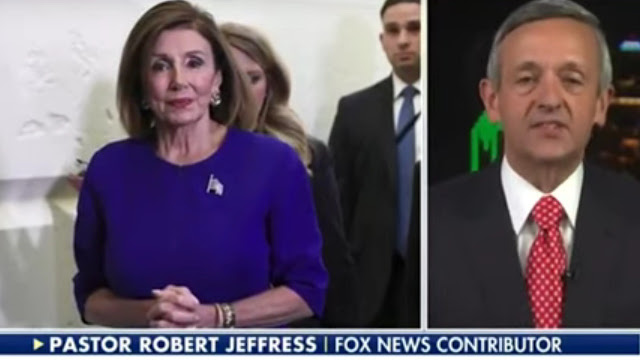 DAILYKENN.com --Well-known evanglical pastor, Robert Jeffress, predicts a civil-war-like fracture if Donald Trump loses the 2020 presidential election. Appearing on Fox and Friends, the pastor of the 13,000-member First Baptist Church in Dallas, Texas responded to Nancy Pelosi's prayer of Trump's impeachment. He reportedly said Democrats don’t care if they burn down and destroy the nation in the process.

It appears conservative Christians are willing to overlook the presidents sins of the flesh (such as using profanities at his rallies and having serial marriages) providing he fall in line with their social agenda.

Nbcnews.com published a story that identified white evangelicals as Trump's more prolific support group. The story seemed to characterize white Christian evangelicals as just so many blind racists. Evoking racism is a common play-ploy utilized by the far left. In lieu of logical and legitimate arguments, the far left routinely stoops to ad hominem attacks.

But focusing on the disconnect between Trump's personal actions and the moral aspects of their faith misses the issue that keeps their support firm: racism. Modern evangelicals' support for this president cannot be separated from the history of evangelicals' participation in and support for racist structures in America.


Nbcnews.com was careful to associate white evangelical Christians, Trump's largest base by percent, with the Ku Klux Klan while evoking the term, "white Christian supremacy." The article evoked the term "racist"

The story evoked the term "race" or a derivative such as "racism" no fewer than eight times.

Missing from the far left's anti-white continuum is the reality that the USA was founded and built by white people, nearly all of whom were evangelicals.

The demographics shift away from whites is recent and is staggering. 81 percent of Americans identified as white Christians in 1976. That demographic has dwindled to 43 percent today. White people are becoming an oppressed minority in the nation their forefathers built. The shift will almost certainly continue leaving our grandchildren with a bleak future similar to that faced by whites in Rhodesia and South Africa. The same holds trues of Western European nations.