Traitors rally against ICE in Aurora 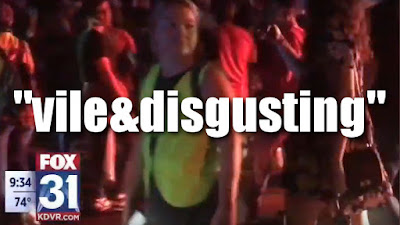 DAILYKENN.com --Traitors continue to pretend their treason is anti-racism. This was made evident in Aurora, Colorado where hordes rallied against ICE (Immigration and Customs Enforcement) Sunday.

Police and patriots were on hand to counter the hate group's rally. Police chief Nick Metz described the traitors as vile and disgusting on Twitter.

What I saw tonite by many of U who protested in residential cmty w/children was vile&disgusting. @AuroraPD protects free speech, but your message was completely lost. U were out of your league. My cops were simply AMAZING despite your attempts to bait them into a confrontation! pic.twitter.com/nMwvsZekNH
— Chief Nick Metz (@APDChiefMetz) September 20, 2019


• In lieu of valid arguments to defend the destruction of Western culture through displacement, globalists revert to accusing patriots of racism. "We are just seeing the racism and discrimination really arise now,” one traitor was quoted as saying.

• Oddly, far-left white supporters of the invasion typically live in white enclaves, far removed from the criminal violence, human trafficking, and narcotics abuse that are common in third-world colonies. White leftists may accurately be identified as practical (or practicing) white supremacists. They obviously believe white communities (or micro-ethnostates) are superior to non-white neighborhoods. Their actions speak louder than words.

Those who want ICE abolished, and others who support the federal immigration agents, were divided by a human police barricade on Saturday outside the ICE processing facility in Aurora.

Immigration advocates gathered at Denver’s City Park around 10 a.m. Saturday. They made their way to Colfax Avenue and moved toward Aurora— arriving at the ICE processing center just after 2 p.m. For more than seven miles, protesters could be heard chanting, and demanding change from our political leaders.

“Its a hike,” said Abdur Rahim Ali, with Northeast Denver Islamic Center.  “But it’s well worth it, because the stakes are high.”

It’s something Ana Vizoso, who was at Saturday’s protest, knew all too well as a kid.

“I’m an immigrant myself.  I came from Argentina at the age of 11 and I was undocumented for many years—and I lived in the shadows.”

“The consequences were the same before," Vizoso said. "We are just seeing the racism and discrimination really arise now.”