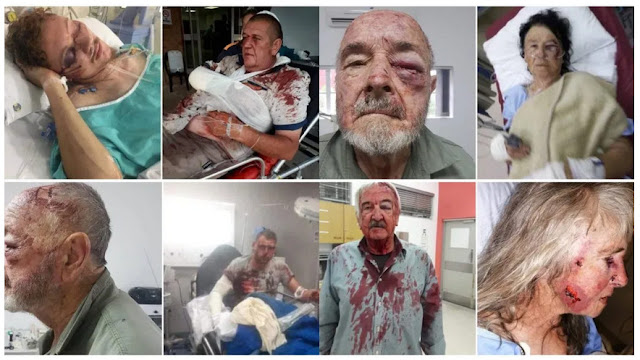 DAILYKENN.com -- It dangerous to live in South Africa, particularly if you are white. Hardly a day goes by without a report of a farm family being attacked. Often the attackers are employees at the farm.

Pictures paint thousands of words. You may view images of farm-attack victims at farmattacks.co.za. Or you may google the search term "south africa farm attacks" and click 'images.'

I am a born South African, I am a white male with a beautifull family. It is not only white farmers being attacked, I have been attacked in my house in the capital of SA and been hijacked. Two different incidents in one year.It is not a joke to look death in the eye, and the worse is I had nothing to do with the so called apartheid. I was too young.

Yes, Mr Deon. I saw and housed at my house in Luanda in 1960, 03 fugitives from the Belgian Congo. One was 15 years old, the other 10 and the 6 year old girl all blond with blue and green eyes and beautiful! Many years ago but I remember perfectly. They had separated from their parents and did not know where they were. The natives destroyed everything they saw, men, women, children, animals, goods of all kinds. This is not just indoctrination of the communists or Americans. This is in their nature, in their soul, if they have one. Then in 1961 it was my turn to protect me from these bad guys. I ended up fleeing to Brazil. However, I returned to Angola later, in 1975 I had to flee forever from the murderous blood of these liberating natives. Progressive country until Independence, today is a disgrace, a confusion of demons.


Those with the means and desire to seek refuge in other nations have already fled. Those who remain either steadfastly refuse to leave the nation their ancestors built, or they simply can't afford the extravagant cost of relocating.

While innocent people are literally being massacred by savages in South Africa, fake historians in the USA weave fantasy tales of white Klansmen randomly attacking and lynching innocent blacks. The black-on-white attacks in South Africa are common and well documented. The white-on-black attacks in the USA are often twisted tales of self defense or totally fabricated and without documentation.
*