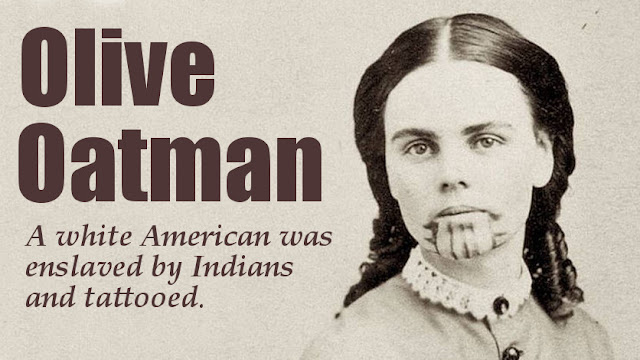 DAILYKENN.com -- Students at a Russiaville, Indiana middle school will get a reprieve from a nonsensical slave-ship reenactment lesson. Parents were informed that their offspring would be yelled at and loosely bound as they acted out the hardships suffered by African slaves brought to the New World in past centuries.

The lesson was cancelled after parents complained.

• We wonder if school officials would consider role playing history lessons in which students were compelled to...

1. Role play the hardships faced by Europeans as they traveled to the America's. Many Europeans suffered from diseases during their trips. Conditions of travel were deplorable; not much better than slave ships. Children were particularly vulnerable. Many died enroute.

2. Role play the massacre of settlers and pioneers by Indians. Perhaps the school could produce a play about the life of Olive Oatman who was enslaved by Indians during which time her face was disfigured by a tatoo. Oatman's pioneer family was massacred. Surviving was her seven-year-old sister who was also enslaved then allowed to die by starvation. Her brother was left for dead with her parents, but managed to survive.

3. Role play whites being beaten by black thugs in Minneapolis this week.

• Black slaves in the United States often lived better than free white people. While slaves often lived in brick homes many whites lives in log cabins, as did Abraham Lincoln.

• Due to the harsh conditions suffered by slaves in Africa, being shipped to the American colonies was akin to winning a lottery.

• Slavery is a misnomer. In the 13 colonies and, later, the USA, slaves were treated more like adoptees or those in foster care rather than slaves. The Roots narrative is largely a myth.