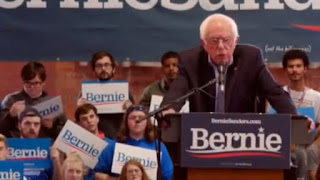 DAILYKENN.com --Bernie Sanders cited racism as a compelling reason to overhaul America's justice system. He wants to cut the prison population by 50 percent.

Sanders appeared to be pandering to black voters.

He doesn't seem to mind that releasing criminals into the black community will increase crime, much of which could ultimately lead to more black-on-black violence.

Declaring the criminal justice system ruined by pervasive racism and “corporate profiteering,” Sen. Bernard Sanders proposed a massive overhaul Sunday that would free many drug convicts, abolish the death penalty and solitary confinement, and promote an unarmed “civilian corps” to replace the police for lower-level calls.

The Sanders campaign said the goal is to keep people out of prisons in the first place, with a goal of cutting the incarcerated population in half. For those who still land behind bars, he called for better conditions with a focus on helping them stay connected to society and to reintegrate faster when they are released.

Mr. Sanders announced the plan as he campaigned in South Carolina. He billed the proposal as an appeal to black voters, who make up a massive chunk of the state’s Democratic primary voters.

“This is an issue of such significance and such volatility that we need to bring it out in the open,” Mr. Sanders told his audience.

Criminal justice reform could be one of the hottest issues of the 2020 campaign.

Bonus: Miracle Noodles and why you enjoy them.

Miracle Noodles, or shirataki noodles, are very low in calories and contain no digestible carbs. The are made from a type of fiber that comes from the root of the konjac plant called glucomannan.

Glucomannan, a natural dietary fiber used for weight loss and weight management. It is viscous; that is a "thickener." A small amount will convert a glass of water into a gel.

Miracle Noodles are a favorite among health conscious individuals because it is filling and nutritious while being low in calories with no digestible carbs. It also delays stomach emptying prolonging the feeling of satiety or "feeling full" after eating. It also reduces the absorption of protein and fat.

Most importantly, perhaps, is the fact that glucomannan (Miracle Noodles) is prebiotic, feeding healthy bacteria in your intestine. Some studies show that it protects against fat gain in some animal. It does this by turning into short-chain fatty acids like butyrate in the intestine.