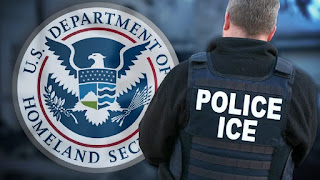 DAILYKENN.com -- A New York City property owner is facing a $17,000 fine after threatening to call ICE on a tenet who is an illegal alien.

Sapna V. Raj, deputy commissioner for the law enforcement bureau of the city's Commission on Human Rights, referred to the threat as weaponizing ICE. Raj evoked language-loading terms such as "marginalizing" and "most vulnerable."

"Immigration status, citizenship, and national origin (perceived or actual) are protected categories under our law," she reportedly said.

A New York judge earlier this month recommended a landlord pay $17,000 in fines for threatening to call immigration authorities on an undocumented tenant.

This is the first case related to housing where threatening to call Immigration and Customs Enforcement (ICE) to harass or intimidate a tenant has been found to be a violation of law, according to a spokesperson for the New York City Commission on Human Rights.

Holly Ondaan, the tenant and an undocumented immigrant at the time the case was filed, testified in court that she became "an emotional wreck" when her former landlord, Dianna Lysius, threatened to call ICE and sent demeaning texts because she was unable to pay rent.

The city's Commission on Human Rights, which represented Ondaan in this case, filed a complaint on her behalf on January 31, 2018 detailing Lysius' alleged discrimination against the undocumented tenant.

Judge John B. Spooner recommended on September 12th that Lysius pay a $5,000 civil penalty, $12,000 in damages for emotional distress and complete 50 hours of community service, according to his written report and recommendation.

Lysius told CNN that she plans to appeal but doesn't currently have legal representation.

"It sets important case precedent for the interpretation of our Human Rights Law to include the weaponization of ICE to intimidate or harass someone in housing as a violation," Sapna V. Raj, deputy commissioner for the law enforcement bureau of the city's Commission on Human Rights, told CNN. "We will not allow our city's most vulnerable to be further marginalized out of fear for their safety in their own homes. Immigration status, citizenship, and national origin (perceived or actual) are protected categories under our law, and we will continue to fight to ensure those protections are enforced to the fullest extent."