French cops clear out massive "migrant" camp due to... 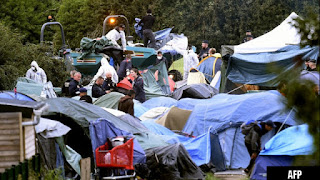 DAILYKENN.com --A facility intended to shelter migrant families from the cold was cleared out by French police. The reason? Local residents complained the gynmasium was the source of "violence, garbage and the presence of people-smugglers among the migrants."

The invaders who occupied the space were primarily Iraqi Kurds who preferred the location due its proximity to the English Channel. The invaders were apparently hoping to smuggle themselves into England.

The facility is located in Grande-Synthe, France.

French police began clearing around 1,000 migrants from a gymnasium near the northern port of Dunkirk on Tuesday after a court ruled it was a health and security hazard.

The mayor of Grande-Synthe in December 2018 opened up the sports hall to migrant families seeking shelter from the cold.

Since then, it has grown into a makeshift camp with around 800 people sleeping in tents pitched around the crammed gymnasium where some 170 people, mostly Iraqi Kurds hoping to reach Britain, had been sheltering.

Young men travelling alone were the first to board buses that will take them to shelters around the region, where they can apply for asylum.

Families were to be moved later.

Northern France has long been a magnet for people seeking to smuggle themselves to Britain in the tens of thousands of trucks and cars that travel daily between the countries on ferries and trains.

The area around Grande-Synthe has traditionally drawn Iraqi Kurds and has been repeatedly cleared in recent years.

A court in the regional city of Lille ordered the gymnasium shut on September 4 following complaints from local authorities and residents about violence, garbage and the presence of people-smugglers among the migrants.

French authorities have had a policy of trying to prevent migrants forming camps since 2016 when they razed a notorious illegal squat nicknamed the "Jungle" near the port of Calais which was home to 10,000 people at its height.