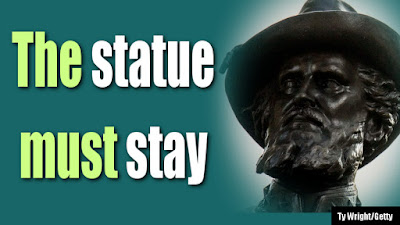 DAILYKENN.com -- Sorry, leftists. Virginia law forbids the removal of war memorials, including those honoring the brave black and white men who defended the Confederacy.

They begin with easiest targets, such as Kate Smith whose "God Bless America" rendition is a national icon. Or, they will attack the Confederate flag and monuments.

Once precedent is established, they move to other targets, such as the Betsy Ross flag and the 'Don't Tread on Me' flag. Notice 'racism' is the most common excuse.

A problem with this strategy is that it trivialized real racism; its a real-life version of The Boy Who Cried Wolf story. It's value is that it reveals the true intentions of the far left: Few leftists truly care about racism; they merely use it as a Trojan Horse to destroy our culture.


A judge in Charlottesville, Virginia has ruled the controversial statues to Confederate Gen. Robert E. Lee and Gen. Stonewall Jackson must stay.

More than two years after the Feb. 2017 vote by the Charlottesville City Council to remove the statue of Lee, which prompted a lawsuit against the city and was the impetus for what eventually became a deadly white nationalist rally, Circuit Court Judge Richard Moore ruled the memorials can’t be touched.

“Even though the city wants to remove the statues, the judge said it can’t,” said reporter Hawes Spencer, who was in the courtroom during Wednesday’s first day of the civil trial.

Virginia law bans the removal or movement of war memorials erected in a locality.

Spencer said the judge said the statute preserving war memorials has been amended numerous times over the years, “and that the iteration of it now existing is more about historical preservation than anything else.”

In its defense, the city had argued preventing the removal of the statues violated the equal protection clause of the 14th amendment by sending a racist message to people of color.

The judge’s ruling “really took the rug out from under the city,” said Spencer.

Spencer said Moore explained his decision: “He said whatever the original intent of the memorial, and we can’t really get into the heads of those who put these monuments to Robert E. Lee and Stonewall Jackson up, today they exist as war memorials, and they are protected under Virginia law.”