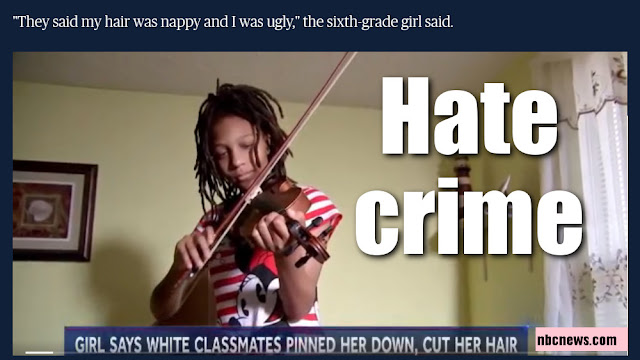 DAILYKENN.com --Amari Allen said she was the victim of a racial attack. The 12-year-old claimed the attack occurred at Immanuel Christian School in Annandale, Viriginia, according to reports. That's the school where Karen Pence teaches.

According to reports, three boys (presumed to be white), routinely stole the girl's lunch. More recently the bullies were accused of cutting the girl's dreadocks against her will.

Fortunately, the story was widely circulated by the mainstream media helping Americans fend off extremism and white supremacy.

Fox5dc.com reported it was a hoax.


ANNANDALE, Va. - A 12-year-old Virginia girl’s claim that she’d been held down by three classmates who cut her dreadlocks was a hoax, according to school officials.

The alleged incident was reported at the Immanuel Christian School in the Annandale area last week.

Amari Allen – who is African American – told local media that the haircutting was the culmination of a series of bullying incidents involving the same group of students.

Along with the haircutting, she said the boys took her lunch every day and ate it in front of her.

“We can now confirm that the student who accused three of her classmates of assault has acknowledged that the allegations were false. We’re grateful to the Fairfax County Police Department for their diligent work to investigate these allegations,” Head of School Stephen Danish said in a statement.

The school also included a statement from the child’s family.

To those young boys and their parents, we sincerely apologize for the pain and anxiety these allegations have caused.

To the administrators and families of Immanuel Christian School, we are sorry for the damage this incident has done to trust within the school family and the undue scorn it has brought to the school.

To the broader community, who rallied in such passionate support for our daughter, we apologize for betraying your trust.

We understand there will be consequences, and we’re prepared to take responsibility for them.  We know that it will take time to heal, and we hope and pray that the boys, their families, the school and the broader community will be able to forgive us in time.