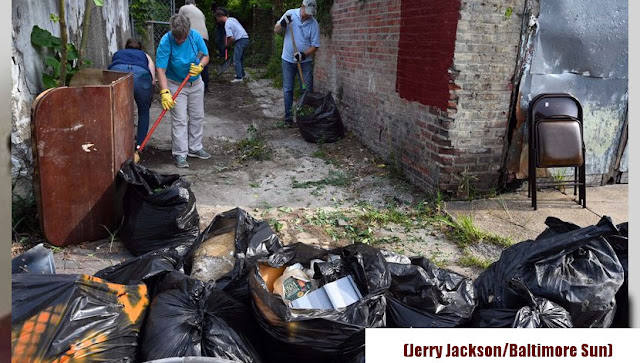 DAILYKENN.com --What can a handful of Trump backers accomplish in a few hours? They can remove 12 tons of trash from Baltimore's blighted neighborhoods. And that's exactly what they did.

The Baltimore Sun, however, took a dim view of the clean-up crew, portraying their efforts as a publicity stunt.

It made for good photos, compelling videos and catchy Twitter hashtags. A group of conservatives rolled their pickup trucks into one of West Baltimore’s most impoverished neighborhoods Monday for a cleanup day. Loaded down with trash bags and shovels, they cleared alleyways of old tires, food containers, paper and other debris. They pulled up weeds and cut away overgrown grass. The group posted before and after pictures on social media showing their progress.


The Sun could have criticized Democrats for failing to help clean up the neighborhood. The paper could have weighed heavy on the residents — nearly all black — who have neglected their area for decades (some of the trash was 20 years old, reports say). The writer could have taken politicians to task for ignoring the rat-infested community. The whereabouts of billions of tax funds could have been questioned; the money pumped into Baltimore to alleviate it's dilemma.

So what's going on in Baltimore?

One hundred years ago the city was a gleaming center of prosperity; a culture center with immense historical prominence. Baltimore was 88 percent white. Virtually every structure was designed by white architects and constructed by white craftsmen. The dilapidated houses were once brand new and incredibly attractive.

What happened? Baltimore experienced a demographic shift. as blacks moved into the city, whites move out to escape the violence. The city regressed to the norm. Were it not for the nation's white infrastructure, Baltimore would be nothing more than a sprawling African village. It appears that most black residents in Baltimore are comfortable living in rat-infested squalor.

• There are pockets of whites living in Namibia. Their neighborhoods look similar to white communities in the USA.

• The same is true of white neighborhoods in South Africa; the difference being massive security fences that protect the houses. The exception is white squatter camps where the oppressive government refuses to allow whites to advance themselves.

• When whites move to Mexico, they create wealth and well-kept neighborhoods. The LeBaron Colony in Mexico has the appearance of a typical white American suburb. The streets, lawns, and houses are tidy. The residents drive America cars and their schools teach American English.