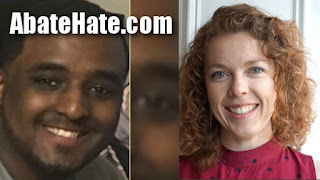 DAILYKENN.com -- Margery Magill is dead. The 27-year-old woman was fatally stabbed while walking a dog in Washington, DC.  The crime was reported August 29, 2019.


The prevalence of video security cameras in the area helped identify the suspect. (If your home is not equipped with a video security system, you may want to consider investing in one. While the video presence won't prevent rabid racists from attacking you, they can assist identifying the racist attacker(s) after you are dead.)

Arrested for the crime is 24-year-old Eliyas Aregahegne. The attack was apparently random, without provocation, and without motive.

The local media refused to suggest the deadly attack could have been racially motivated. Rather, the media deferred to an insanity defense, trying the suspect in a court of public opinion with reports of a history of mental illness.

• Considering the epidemic of black-on-white and black-on-black homicides, there must be a large number of mentally unstable black individuals.

• Cultural Marxists who use the term "feminists" remain silent.

• While Americans are taught to hate white people because they are innately racists, whites are taught to forgive blacks who violently attack them. Here is a story of a white woman who forgave the black male who stabbed her and helped get him released from prison.

A 24-year-old man is accused of fatally stabbing a stranger who was a walking a dog when she was attacked in Washington, D.C.

Eliyas Aregahegne was arrested Wednesday and has been charged with first-degree murder in the fatal attack Tuesday on Margery Magill, 27.

Police said officers were called to a report of an unconscious person on Irving Street NW around 8:50 p.m. and found Magill with multiple stab wounds. Nearby residents were providing medical aid before she was taken to a hospital and died, officials said.

Magill was working as a dog walker when she was stabbed, D.C. police Chief Peter Newsham said.

"Margery was a young professional who just received her master's degree in international relations, and who by all accounts was beloved by her family and friends," Newsham said at a Wednesday news conference.

A motive has not been determined, and the police chief said that detectives have found no evidence to suggest the attack was an attempted robbery or sexual assault. He called the type of attack very rare.

Aregahegne appears to be a stranger to Magill, Newsham said. He said investigators don't have any information that drugs or alcohol were involved.

Detectives tracked Aregahegne to a nearby residence where he was arrested Tuesday night. He was charged Wednesday morning, Newsham said. The police chief said that the number of video cameras in the area played a key role in the arrest.