Out-of-staters rush to Baltimore to clean up mess 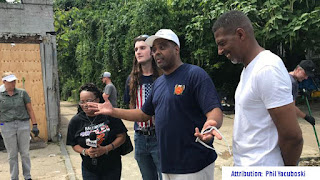 DAILYKENN.com --Apparently residents of Baltimore are unwilling or unable to clean up their own rat-infested mess.

With Baltimore's mess in focus, volunteers from several states made their way to the once proud city to tidy it up a bit. The organizer, Scott Presler, is a Trump backer.

How long will the new sprucing last? Not long.

Where Africans are, Africa is and will be.

Volunteers from several states have banded together to clean up Baltimore's streets, following a tweet last week from President Trump asserting that Baltimore "is a disgusting, rat and rodent infested mess.

Tweets from Trump also personally jabbed at Maryland Rep. Elijah Cummings, saying that if he "spent more time in Baltimore, maybe he could help clean up this very dangerous and filthy place." Cummings responded in a Saturday news conference from Baltimore encouraging people to come to the city to visit and help stimulate the sluggish tourism economy.

Scott Presler, an outspoken conservative activist, responded to the president's remarks with a call to action, tweeting "Next week, I'm coming to Baltimore. I'm organizing a trash clean up in the city. If you're free on a week day, after work, please comment below for more details. #WeAreBaltimore."

The tweet drew nearly 250 volunteers to Baltimore on Monday, who energetically cleaned trash from the streets. Presler's efforts, in addition to organizing the work crews, included providing food, water, dumpsters, and portable bathrooms for the volunteers to use while they worked.

"This is not political,” said Presler, an avowed Trump supporter. “We saw a need in the city, and we wanted to come together." Some were wary of Presler's motivations after tense, public feuding over Trump's tweets about Baltimore dominated national headlines.

"These must be the good ones,” said Baltimore resident Sondra Rae of the conservative-led volunteer group. “I don’t like Trump, but what they are doing is fantastic."

Presler and his crew of volunteers were also joined by West Baltimore Pastor Tony Hill who said, "It’s people over politics. Things like this really forge alliances between neighbors. We have one cause in mind and that’s to clean up Baltimore."

By Monday afternoon, both #BaltimoreCleanup and #AmercansHelpingAmericans were trending on Twitter. Several volunteers posted before and after shots of the streets they had just helped to clean.